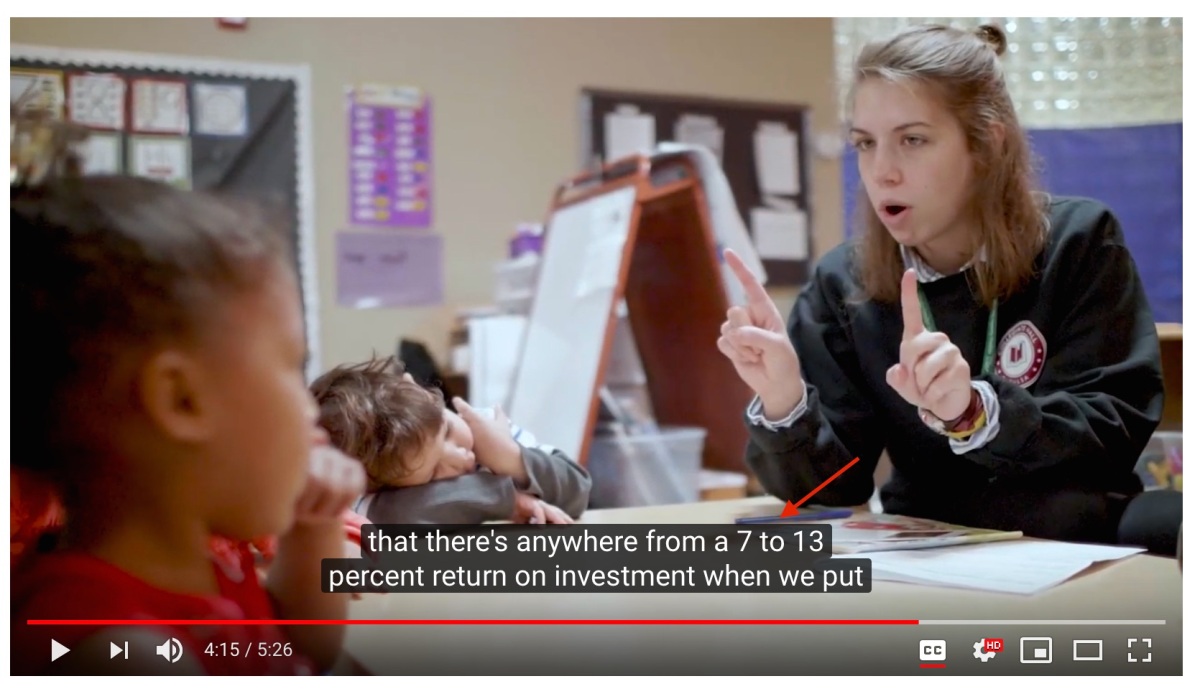 In a previous post, When We’re The Packages, I discussed the role the Annie E. Casey Foundation (UPS $) played in developing the field of human capital impact investing. One infrastructure element developed and promoted by the foundation is data collection across multiple-generations. Their two-generation approach expands opportunities to profit from impoverished families, because the impact of “evidence-based solutions” can be calculated for both parent AND child.

The Aspen Institute’s Ascend 2Gen Initiative ran with the Casey Foundation’s “two generation” concept, turning it into a tool kit that has since been taken up by the National Conference of State Legislators. Ascend is one of many initiatives operating under the umbrella of the Aspen Institute, which is pursuing efforts in the areas of social impact “philanthropy,” community “solutions,” up-skilling and the “future of work,” social emotional learning in children, and a NextGen Network program exploring “ethical” artificial intelligence, underwritten by none other than Microsoft. Take a minute to scroll through the network members; there are SO many. 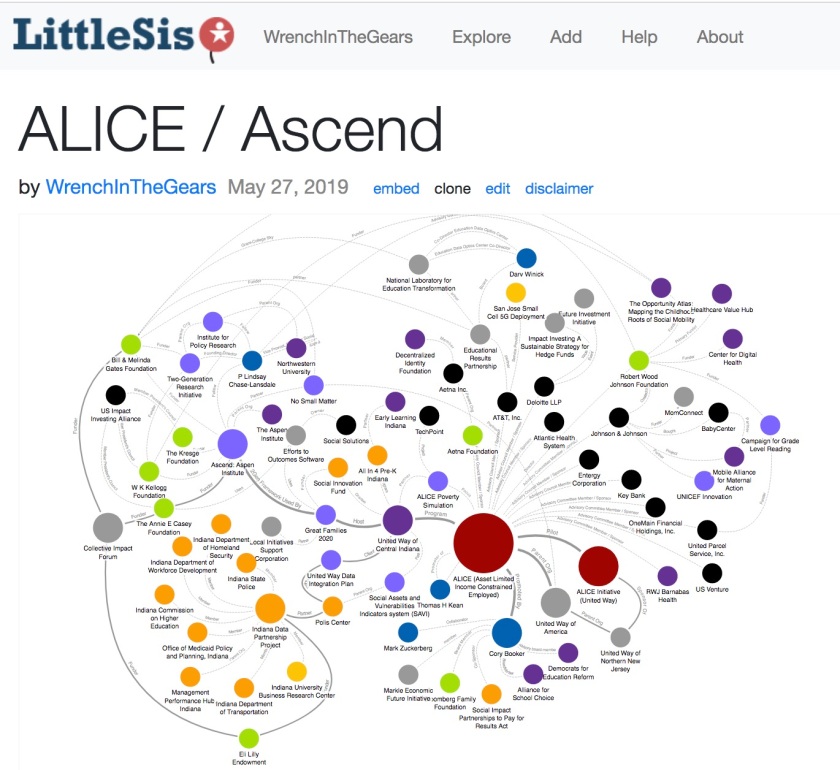 Interactive version of map above here.

Few realize there is currently a push to use machine learning on data collected through social welfare systems, though they’ve been discussing it for at least a decade. In 2010, Harvard hosted a symposium, co-sponsored with Accenture (co-creator with Microsoft the ID2020 digital identity system), on what the next generation of human services would look like – essentially, what the “business model” was going to be. The conditions laid out presumed continued austerity, increased demand and severity of need, and rising costs. There was considerable discussion about the use of technology and how to apply it to the human services’ “value curve.” 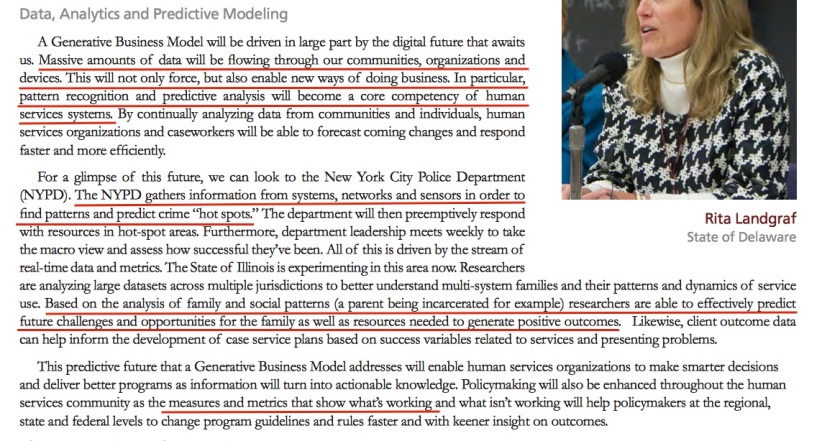 Page twenty-seven of the report (above) states that moving forward, predictive analytics “will become a core competency of human services systems.” It then goes on to describe the use of sensor technology in systems of policing and family profiling that were underway in New York and Illinois at that time. There was no discussion regarding the ethics of profiling the poor, nor the certainty that racism would become embedded in these systems, further exacerbating oppressive aspects of whiteness. Those trapped within automated social service systems will have even less opportunity to contest their situation once algorithmic authorities have decamped to the cloud, well beyond human reach. 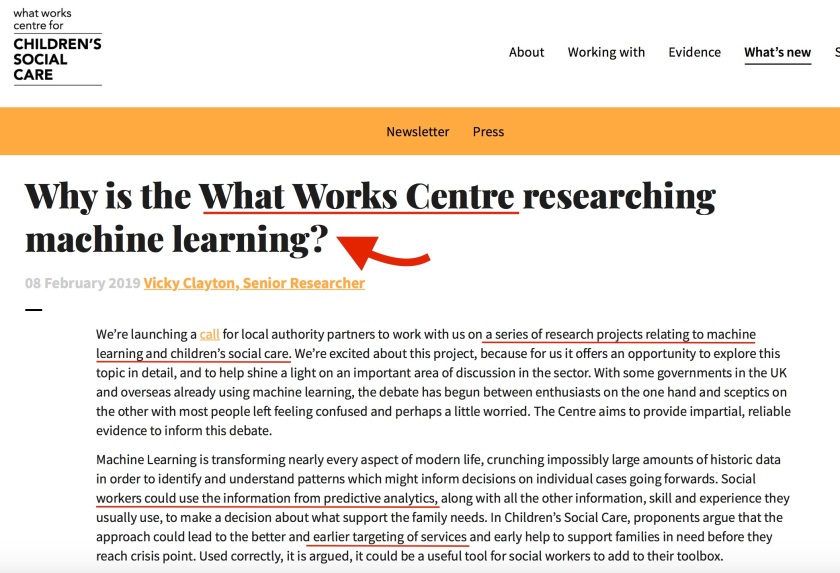 This February, the What Works Centre, based in the UK, put out a call for partners interested in developing predictive analytics for child protective services. As people are increasingly tethered to devices that force compliance, and public services are cut to the bone or outsourced, it isn’t a stretch to imagine the “what works” approach will be weaponized to keep poor parents and children in their place while enriching elite investors in “evidence-based” programs. Meanwhile, the tech and telecommunications sectors benefit, as the ALICEs (Asset Limited, Income Constrained, Employed people) furiously feed data into cloud-based systems in an attempt to survive and keep their families together. 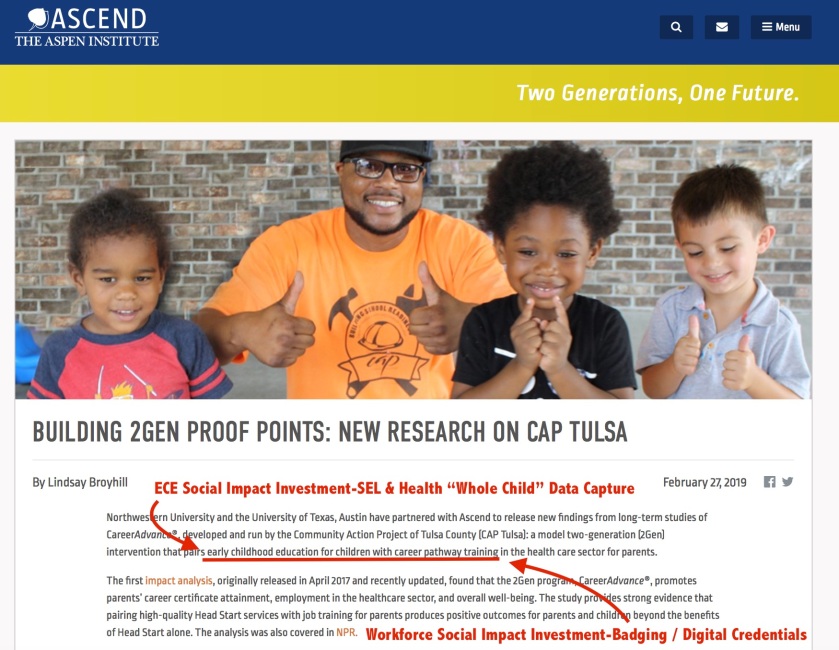 Community Action Project of Tulsa (CAP Tulsa) is one example of an “anti-poverty” program that advances the two-generation approach. It combines workforce training in healthcare, a program called CareerAdvance, for parents with “evidence-based” Head Start programs for their children. P. Lindsay Chase-Lansdale, founding director of the Two-Generation Research Initiative at Northwestern University, and her colleagues began research into this effort in 2008 and published an impact analysis for CAP Tulsa in February of 2019. 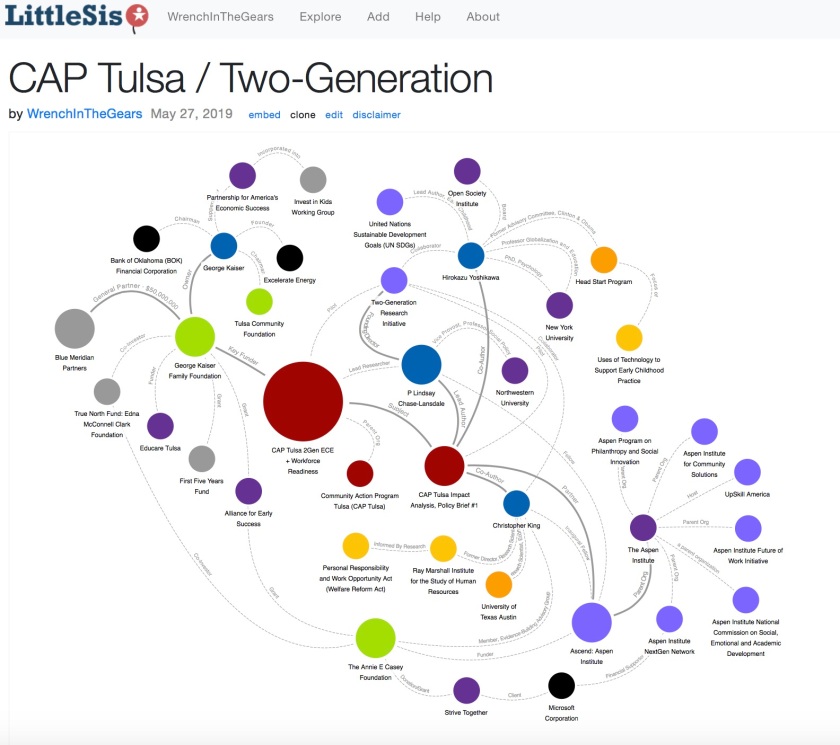 This video about the program specifically mentions the Heckman equation and the 7-13% return on investment in early childhood interventions at timestamp 4 minutes and 15 seconds. Let me make this perfectly clear: while such programs are portrayed as benevolent, they have been developed first and foremost to channel global investment capital so as to generate guaranteed rates of return for financiers at the expense of the masses. As such, these “evidence-based” interventions will NEVER eliminate poverty, because its continued existence is a precondition for the proper functioning of social impact profit-taking enterprise. 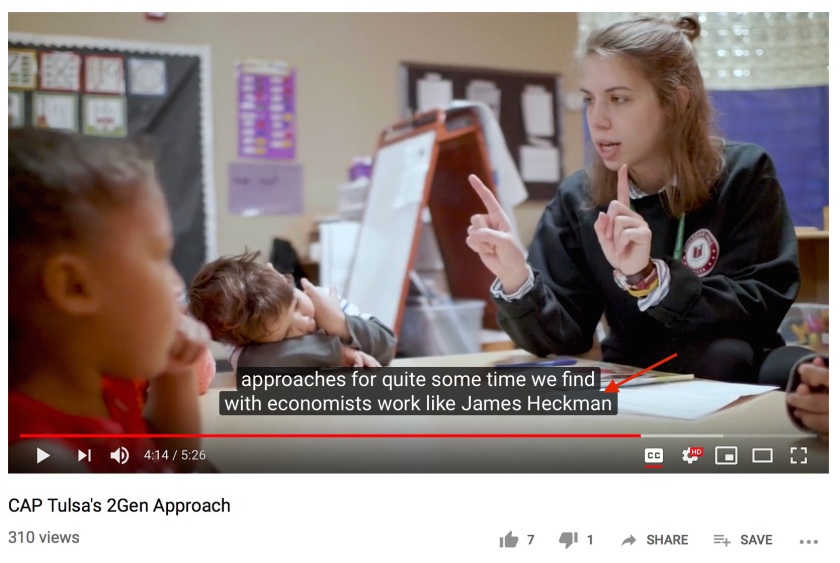 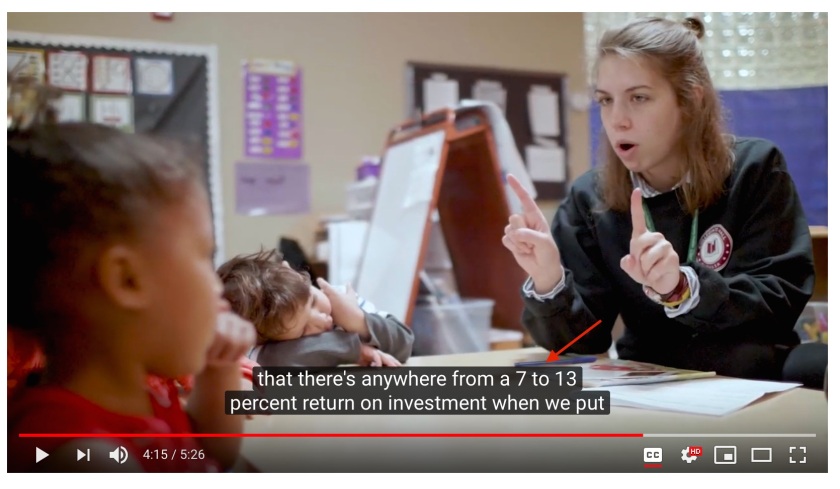 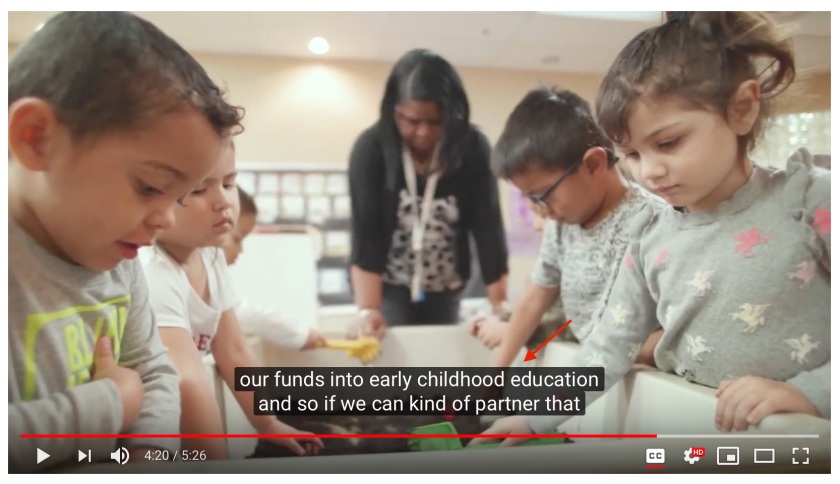 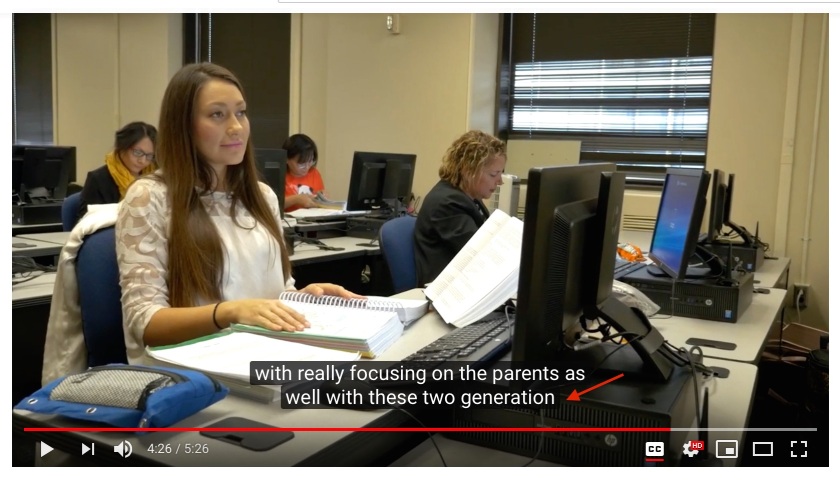 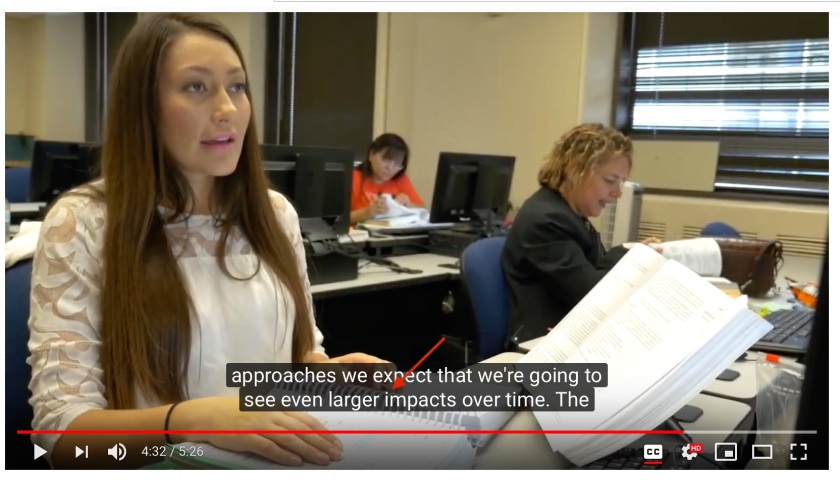 One of the key funders of CAP Tulsa is the George Kaiser Family Foundation. Kaiser made his fortune in petroleum and held prominent positions with the Bank of Oklahoma and the Tulsa Community Foundation. His family foundation has $50 million invested in Stanley Druckenmiller’s Blue Meridian Partners and previously had assets in the Edna McConnell Clark Foundation’s True North Fund (more here on Druckenmiller). Interactive map of Blue Meridian Partners can be accessed here. 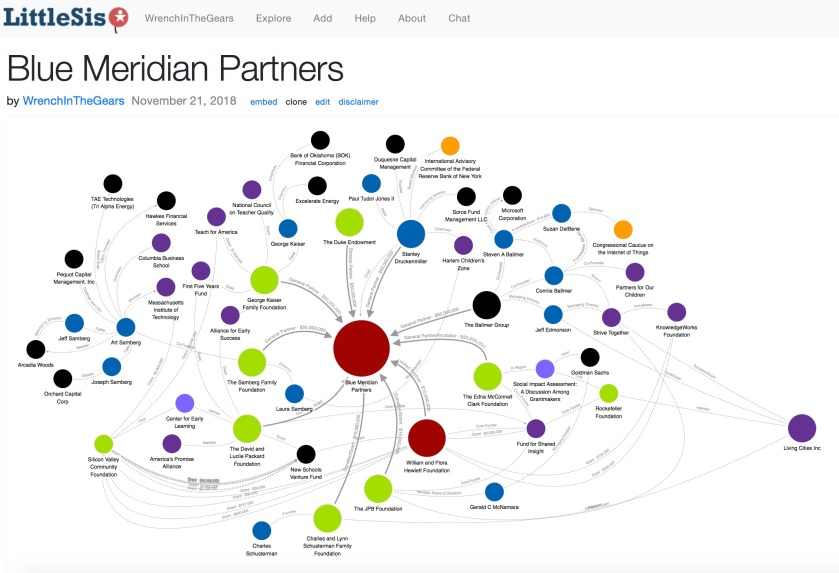 Kaiser has been in on the ground floor with early childhood impact investing from the beginning, maintaining close ties to Robert Dugger, Sara Watson, and the Partnership for America’s Economic Success (later ReadyNation) as they laid the rails for human capital speculation, starting with home visit and pre-k data and extending into workforce development / up-skilling via digital credential acquisition.

He’s invested in Educare initiatives in Santa Clara County, CA and Tulsa, OK, as well as in the Alliance for Early Success and the First Five Years Fund. Educare is part of the University of Chicago and Diana Rauner’s Ounce of Prevention Fund’s charter-affiliated Birth to College continuum that promotes data collection through intrusive systems like Teaching Strategies Gold (TS Gold). 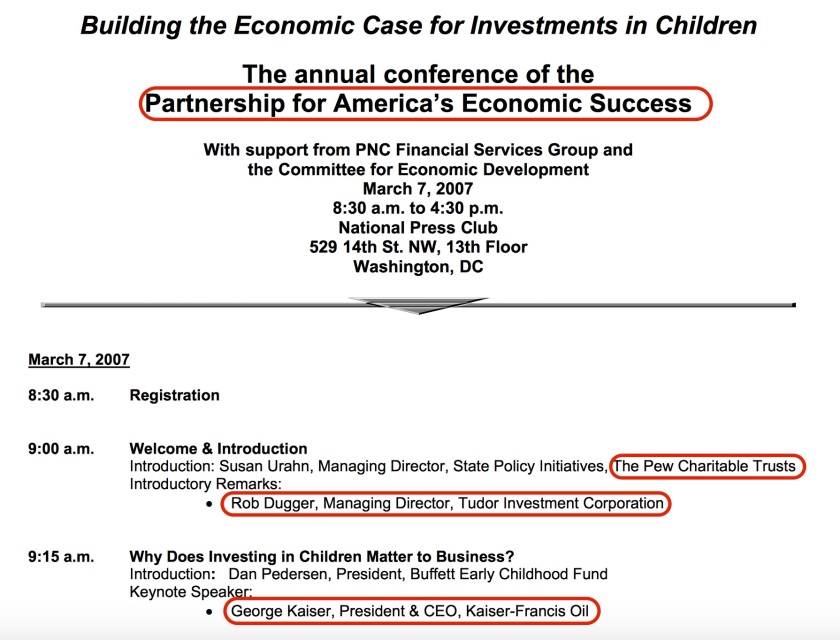 I want to mention two other co-authors on the CAP Tulsa impact analysis. In addition to P. Linsday Chase-Lansdale, there was also Christopher King, a research scientist and economist at UT Austin who for many years directed the Ray Marshall Institute for Human Resources where extensive research into welfare “reform” was conducted.

Hirokazu Yoshikawa, an NYU professor of globalization and education who served as an advisor on Head Start in the Clinton and Obama administrations, was also on the CAP Tulsa impact assessment team. Yoshikawa, notably, led the framing out of the UN Sustainable Development Goals for early childhood and served on the board of George Soros’s (INET) Open Society Foundation. 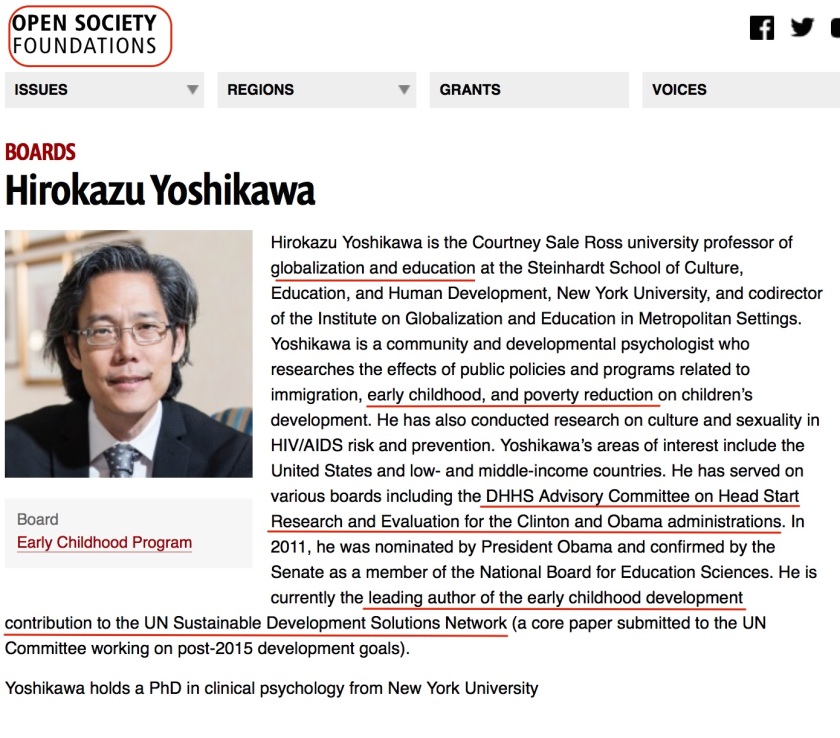 The United Way is pursuing its own Two-Generation “collective impact” agenda in coordination with the Strive Network, which I wrote about here. Strive has ties to Microsoft through Connie and Steve Ballmer, Ballmer Group, and Blue Meridian. Many of their investments are in outcomes-based, social service software programs, including data dashboard systems like Social Solutions’ “Efforts to Outcomes” shown below. Even in communities without a Strive presence, social impact infrastructure is being rapidly deployed to control and manage poor families. 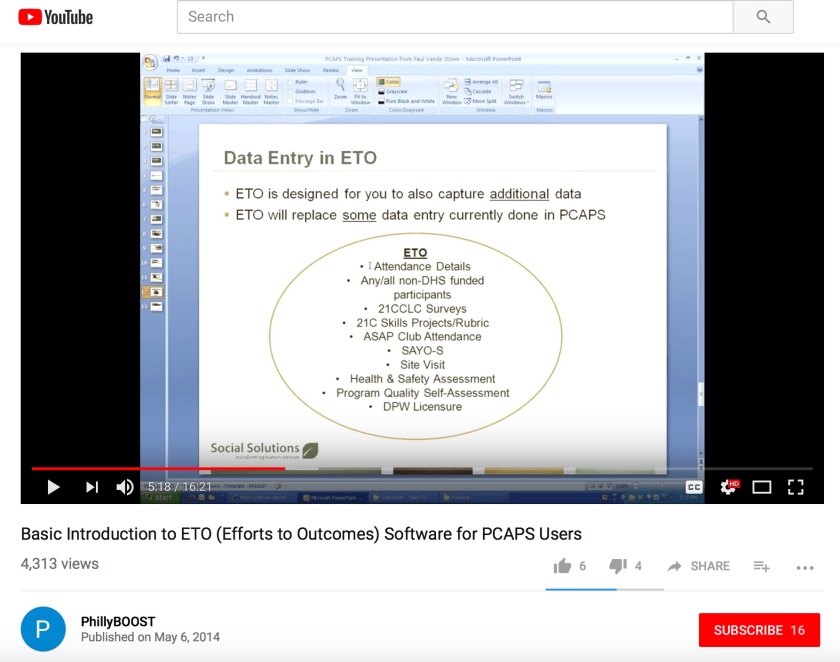 Other systems like ClientTrack (below) triage those needing services, using data and predictive analytics to determine how likely a “Housing First” intervention is to yield a measurable “impact.” This strategy is outlined in a 2018 Harvard study, “The Massachusetts PFS Story: Social Innovation Financing As A Catalyst for Change.” It is interesting to note that Eccovia Solutions, the parent company of ClientTrack, describes itself as offering whole-person tracking ranging from prisoner re-entry to refugee resettlement to behavioral health and chronic illness management; all of which, not coincidentally, are ripe for pay for success contracting. The City of Philadelphia’s Office of Supportive Housing signed a contract to use ClientTrack for its Homeless Management Information System (HMIS) in 2016. The company is based in Salt Lake City, home of one of the nation’s first social impact bonds and stomping grounds for leading players in human capital impact investing market including Jim Sorenson, who finances a social impact research center at the University of Utah business school, and Goldman Sachs. 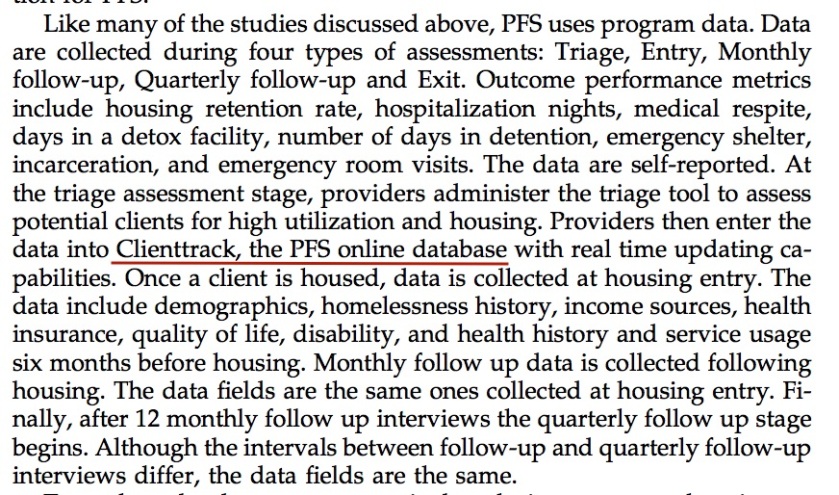 An example of a two-generation data-collection program managed through the United Way is Great Families 2020 which operates in Marion County, IN. This county is home to Indianapolis, a hotbed of education privatization and home to the Lumina Foundation (workforce readiness and digital credentials), the Eli Lilly Endowment (major US philanthropy with ties to the pharmaceutical industry that makes grants to faith-based institutions), and EdChoice (Milton Friedman’s school choice think tank). Indiana is taking steps toward competency-based education, pre-k for all, and pay for success finance. The county is also home to Indiana University-Purdue University Indianapolis, which houses a new state data-hub managed through the Polis Center. 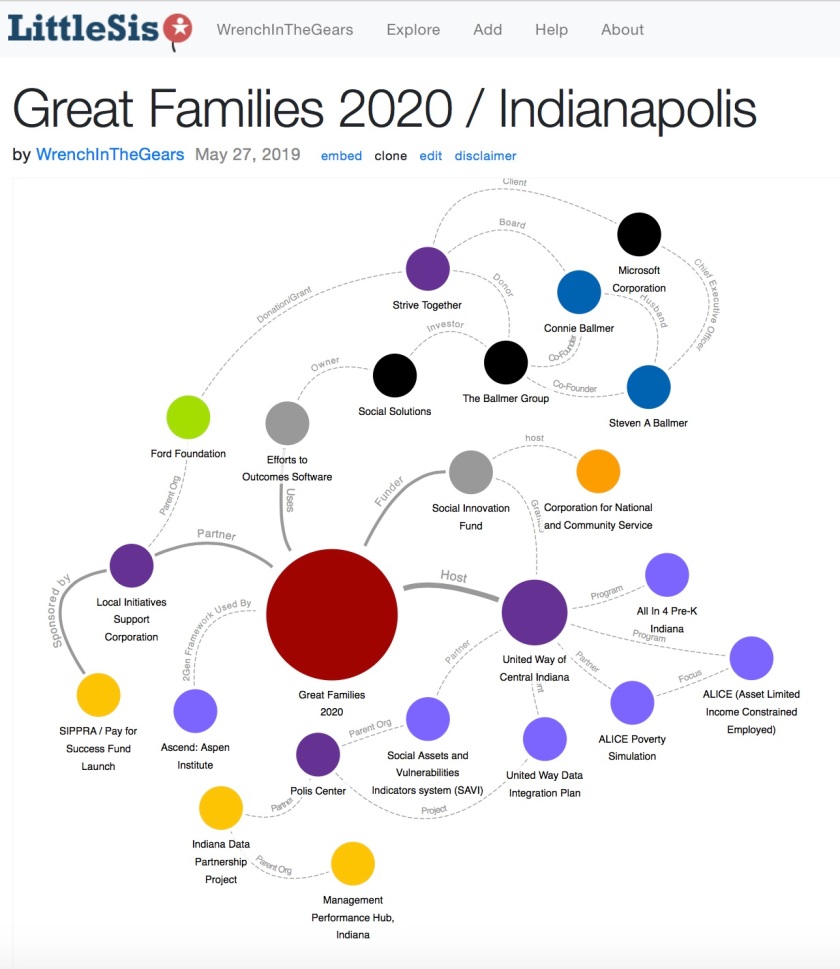 The Social Innovation Fund of the Corporation for National and Community Service provided seed funding to launch the United Way of Central Indiana’s data integration plan, one that will create a conducive environment for future Pay for Success deals. That effort is being coordinated with the Management Performance Hub / Indiana Data Partnership sponsored by the Eli Lilly Endowment, which also backed Marc Tucker’s (Dear Hillary Letter) National Center for Education and the Economy; the Collective Impact Forum, an accelerator for impact investing; and “Partnership for Early Learners,” to the tune of $20 million in 2014 which was meant to establish statewide standards around pre-k and early childhood education workforce quality indicators. 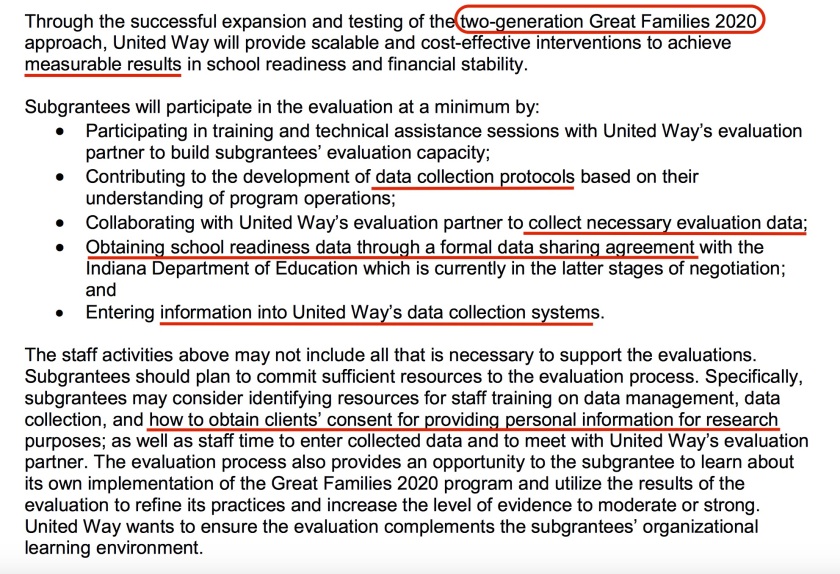 Thus, in the name of “transparency,” “improved” outcomes, and “leveraged data,” sophisticated predictive models will be run across data from Indiana’s health, education, security, economic, and transportation sectors. LISC, the Ford Foundation’s community redevelopment program, is also in on the game. It seems the intent is to “redevelop” communities that have been systematically undermined through redlining, environmental racism, over-policing, and economic disinvestment and turn them into digitally engineered laboratories where those who are not pushed out become human game pieces, pressured to navigate a techno-panopticon of social welfare mandates. Every aspect of a person’s life and social relations will be optimized for social control, efficiency and profit for social impact investors. 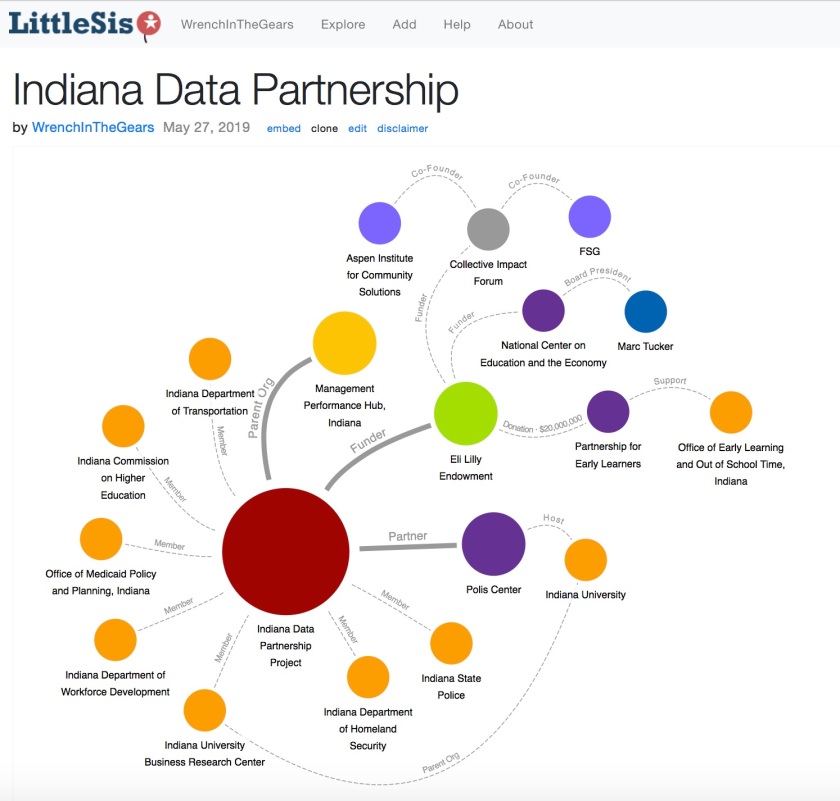 A “data-driven” “two-generation” approach to maternal and child care may seem sensible until you realize its backers only intend to pursue interventions deemed “measurable,” “scalable,” and value-oriented. Large segments of the population, mostly Black and Brown people, will be deemed disposable by financiers, of use only insofar as they yield actionable data for the human capital “game.” The “solutions” proffered will be tech-centric, since digital platforms facilitate deal evaluation.

Picture what’s happened with data-driven, online education and apply those terrible outcomes to healthcare, counseling, workforce training, and supportive housing. It will expand the perpetual underclass and create another class of de-professionalized facilitators (educators, health care providers, therapists, and social workers) who are pressured to carry out toxic “evidence-based” ministrations, even when doing so goes against everything they know is right and just. This two-generation strategy will be soul-killing for two ALICE generations and the workers charged with carrying out these schemes against them.