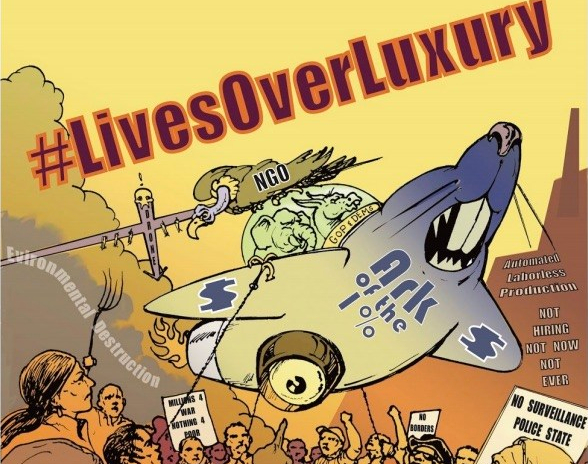 Today the Poor People’s Economic Human Rights Campaign officially launches preparations for the 2020 Democratic National Convention in Milwaukee where we plan to march to demand an end to the wars at home and abroad. The 67 cents of every taxpayer dollar that is devoted to waging war must instead be used to meet our responsibilities to those in need here at home. The theme of the march, #LivesOverLuxury, speaks to the brutality of wealth inequality, gentrification, and dispossession. The Poor Peoples Economic Human Rights Campaign is an organization advocating for the rights of poor and is led by poor people. This afternoon there will be a press conference in Milwaukee. Press release below.

The Poor People’s Economic Human Rights Campaign (PPEHRC) and the Poor People’s Army announce the #LivesOverLuxury March on the DNC, that will be held opening day of the Democratic National Convention on July 13, 2020 at 4:00 p.m.

MEMBERS OF THE POOR PEOPLE’S ARMY WILL BE ON HAND JANUARY 10 AT 2:00 P.M., AT FISERV FORUM ON THE SE CORNER OF 6TH ST AND WEST JUNEAU IN MILWAUKEE, WI, the site of this summer’s DNC, to speak to the press and public about plans for the march and the teach-in they are holding.

Cheri Honkala, a formerly homeless mother, antipoverty advocate, and
founder of PPEHRC, will provide details of the march. Also present will
be other PPEHRC leaders who organize and educate around issues impacting youth, student debt, community and police violence, climate crises, lack of living wage jobs, and homelessness.

“I want to encourage everyone to come out and address this epidemic, the
endless gun violence, that exists in our communities, especially the
African American community,” said Jamal Johnson, of Stop Killing Us
organization. “Also want to make all aware that we are the solution to
the problem, so we must galvanize to combat it. That’s in a country that
spends $50 million on security for a week at the DNC but abandons
addressing the violence at home.”

“People don’t have a place to live, they’re dying. There’s homeless
people right here in Milwaukee, and violence at home and abroad,” said
Honkala. “As Dr. King said, humankind must put an end to war or war will
put an end to humankind.”

Since 2000, PPEHRC has had the largest marches outside both the
Democratic and Republican National Conventions each election year. This
year, at a time so crucial for the future of humanity and the planet,
PPEHRC will amass the largest Poor People’s Army this country has ever
seen outside the DNC to take back the $.67 of every government dollar
spent on war and occupation, to end poverty and all forms of violence at
home and abroad.

PPEHRC is dedicated to building a movement that unites the poor across
color lines. Poverty afflicts people of all colors. Every day more and
more people are downsized and impoverished. Millions of Americans are in
poverty, and millions more working and middle class people are just
paychecks away, or medical bankruptcies away. from homelessness and
poverty.

With the world’s press and attention on the theatrics at the Democratic
and Republican conventions, the Poor People’s Army will put poor people
front and center in a historic march that will demand a different kind
of world where the world’s resources are protected and used to meet the
basic needs of all people. The march and teach-in will feature speakers
and performers from across the country.

Andy Willis, our comrade from Chicago, created an amazing poster to promote the event. Because of my research I was asked to write up a brief description to go with it, even though the visual alone is incredibly powerful. The take-away is that while we are up against incredible odds, and our government (both sides) has completely sold us out, we should not despair, but instead organize. Poor people, working class people DO have power; what is needed is to come together. Organizing for this march and week-long teach-in provides just such an opportunity.

We face a disruptive future brought about by climate catastrophe, militarization, wealth inequality and the automation of labor. The global elite have deprived the masses of a living wage, access to stable housing, healthy food, and quality healthcare. We are at a tipping point. Millions are cast out of their communities, disconnected from one another and social institutions. With so many adrift in media noise, drugs, and violence it is vital that we focus, organize, and begin to restore authentic connections and systems of mutual aid to prepare for what is to come.

Those in power intend to manage global disruption profitably and brutally. That infrastructure is being put in place now, branded as “smart” city technologies. Cloud computing, Internet of Things sensors, artificial intelligence, and Blockchain feed signals intelligence to US Defense interests. Sophisticated systems of surveillance and militarized policing are sneaking in behind innocuous programs like transit apps and digital payment systems. We are unthinkingly adopting life-killing technologies that will force the poor into open-air jails as we poison the planet. There is nothing “smart” about systems that demand the mining of rare minerals by child labor and vast quantities of clean water to cool server farms, not to mention e-waste.

Hedge funds plan to use technology not only to police us, but also to nudge our actions and digitize us as data. Then they can gamble on our identities, our futures as human capital assets, securitized and traded on derivatives markets. The poor will be biometrically linked to benefit vouchers and tracked through the Internet of Things panopticon. The price of living in this world of austerity is behavioral compliance. Stay on the pathways, or else. This is a bipartisan scheme where elected officials front for IBM, Oracle, Cisco, HP, Intel, and Qualcomm. Leaders swap out at election cycles, but the “what works” data-driven government machine stays on its destructive course, lining the pockets of Goldman Sachs and Blackstone as we get ever closer to the edge of the cliff.

But this future is not preordained; it can and will be contested. We will fight inhumanity with relationships. Our clarity is an antidote for corporate propaganda. Together we will channel our creativity and expose these sickening schemes while making provisions to care for one another with shared resources. Endorse the march, make a donation, and connect with the Poor Peoples’ Army. More information, including a #LivesOverLuxury toolkit, available here. I am planning to attend. If you are in the Philadelphia area and want more information, get in touch with me through the blog.